For our after effects project, our group (Shivani, Shiyu, and I) cycled through many different ideas before landing on what story we wanted to tell. We had a lot of inspiration that we shared amongst each other, but below are the two main influences that shaped our project.

One of our group’s main inspiration was this blue umbrella animation by Pixar:http://prettybird.co/us/talent/collaborators/saschka-unseld/work/the-blue-umbrella/

We really loved how they mixed the real and the animated – this combination is something we incorporated into our own.

Another inspiration was this Belle & Sebastian music video:
https://www.youtube.com/watch?v=pETHnjMzZjk We also really enjoyed the concept of seeing a story unfold within a building as a voyeur.

We then worked on narrowing down the concept and storyboarding the EXACT scenes that we had to create. It was very helpful to do this step since it helped save us a lot of guess work. It was really fun to draw the storyboard based on the ideas that our group came up with. See the below images for the full storyboard sketches.

After we storyboarded, I drew those exact compositions in Photoshop. I made sure to keep organized with the file naming and group files within Photoshop so that it would be easy to animate once we were in After Effect. I think being organized really helped, because there are so many assets in just one scene. Screenshots below show the photoshop file with all the folders and file names. 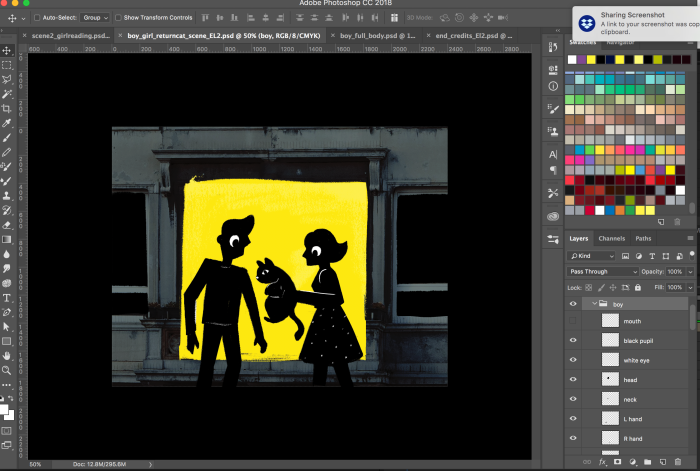 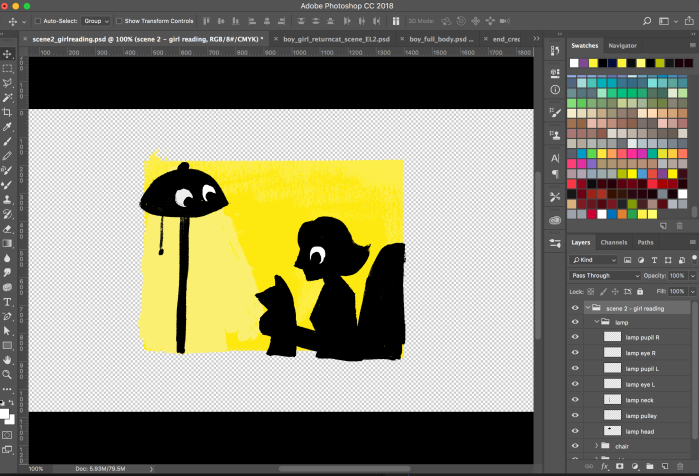 We then got to work on animating. It was such a great learning experience to work on all the scenes with the cat! Before this class, I was always unsure of how the layer situation worked when you imported files and assets into After effects.  Working on this project helped me realized how that system worked and how precomposing is done in After Effects. It was also fun to try out new skills that were taught in class (i.e. masking tool, puppet tool, some fun AE effects). Below is an image that shows the many layers within layers there were in After Effects; all the compositions were nested within each other (i.e. the file path for one scene became “Comp1< cat multiple angles closeup < only speech bubble 3 < only speech bubble 2 < man woman icon.”) 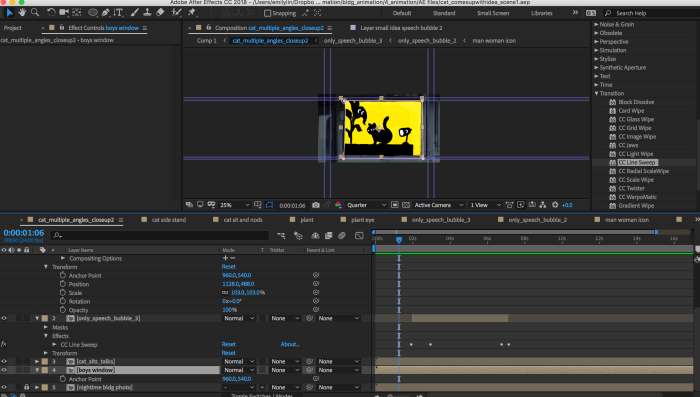 Shivani then put together all the comps in Premiere and integrated the soundtrack that Nick made. The final touches of the end credit sequence and title intro were created.

This project and class helped clarify a lot of AE tools that I never fully understood before. I’m definitely going to animate more now that I have a better (though probably still very shallow) understanding of how this program functions!